To many people, diamond grading  can seem extremely complex. A master gemologist’s training in gem appraisal can take years. Still, a few simple concepts can help you to read and understand a diamond’s grade and a report so that you are confident to compare quality.

Diamonds are as varied as people are, and choosing or wearing the right one can make a unique statement about the person wearing it, or the person giving it.

Chances are you won’t be shopping for a flawless diamond, as such a thing is extremely rare and expensive. Finding a beautiful gem with no flaws visible to the naked eye, though, is another matter altogether. They are easily available at reasonable prices.

When you begin shopping for a diamond, you will encounter the Four C’s, the quality standards for diamonds. Here is a short grading primer on what each C means and how it affects the value of the gem. 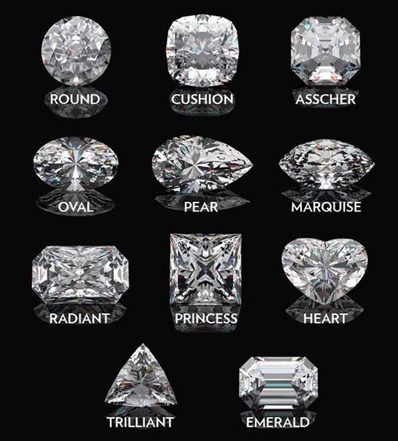 Of all diamond qualities, cut has the most to do with brilliance: the combination of sparkle and fire. A well-cut diamond maximizes the facets to reflect the most light possible and separates and intensifies the colors of the rainbow. There are three parts to the cut: the crown, the girdle, and the pavilion. Basically the girdle is the widest part of the stone, by which it is held in its setting. The crown is above the girdle and the pavilion is below it. The ratio of depth to width and angle of the facets determine the brilliance.

A diamond’s color quality refers to its body color, rather than the rainbow of reflected light. The whiter or more colorless the stone, the more valuable it will be (except for specific “fancy” colored diamonds, which can be extremely rare). Color is very difficult to evaluate, even for trained professionals, because we all perceive color differently, and differences between stones can be very subtle. Yet small differences in color can have a big effect on the price. Color is graded by the Gemological Institute of America (GIA) with letters ranging from D (completely colorless) to Z (yellow). The setting can also affect the color, which is why many people today opt for white gold or platinum prongs. But in some instances, yellow gold might better complement the diamond.

Clarity refers to the flaws in the stone itself. It is evaluated under 10X magnification and graded according to various systems, most often the one developed by the GIA. Almost all diamonds contain slight specks, which serve to uniquely identify each stone. These specks are called “inclusions,” a word which refers to anything trapped within the diamond crystal. These inclusions may be dark spots of other minerals, open cavities, or internalcracks or fractures, called feathers. The grading system measures number and severity of inclusions from flawless or nearly flawless to imperfect, which would indicate the inclusions in the diamond are easily discerned by the naked eye.

Carat refers to the weight of a diamond, though it is typically used to refer also to the size of a “well-cut” stone. One carat weighs 200
milligrams, or one-fifth (.2) of a gram. Stones of less than one carat are often described in terms of points, where each point represents 1/100th or .01 carat. So a 1/2 carat stone would be 50 points. In practice, a fraction of a carat weight represents a small range rather than an exact weight. As the weight of a diamond increases, so does its value and cost. But because larger stones are more rare, price jumps accordingly. A 2-carat diamond will always be more expensive than two 1-carat diamonds of the same quality.

About The Jeweler’s Bench

When you need the right look and feel for that special someone in your life, let us help you find that unique style. At The Jeweler’s Bench we have a large selection and have been making custom jewelry since 1981.

Saturday : By Appointment Only